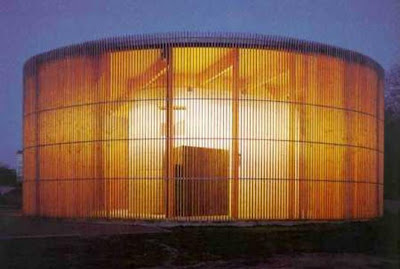 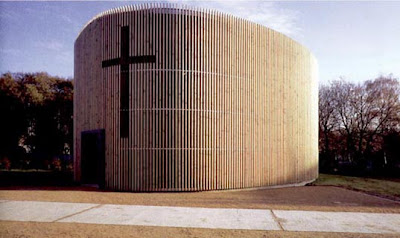 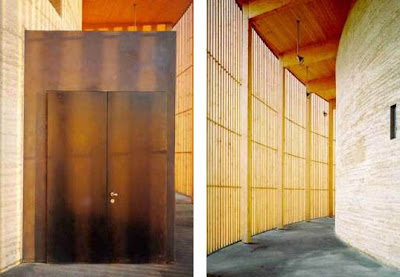 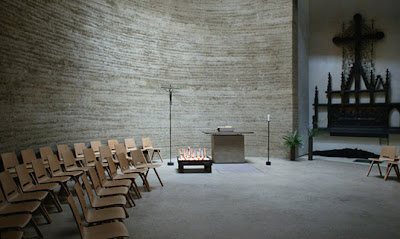 By Berlin architects Rudolf Reitermann and Peter Sassenroth, located in the former 'no-man's land' between East and West Germany.
Uniquely, it is a literal 'reconciliation', being constructed of load-bearing rammed earth walls (60 cm thick) which contains the remains of the previous church on the site, demolished by the East German goverment in 1985. Hard to be more 'genius-of-the-place' than that.
From a site on the history of the chapel:
"An open-work structure extends over the solid clay centre, surrounding it as a covered walk with a view to the environment. This space forms a transition and a threshold between the outside ambiance and the religious interior. The external framework, including the roof, is constructed from wood - also a natural and ecological material. The wooden columns, staves and beams form a light translucent cover, contrasting to the massive clay walls of the interior. From the outside the chapel looks as if framed with fixed vertical blinds, that cast picturesque shadows in the intermediate space. "
Like Shigeru Ban's paper church, the Chapel of Reconciliation features an elliptical central gathering space encircled by a hallway for circulation, and uses repetitive columns to provide a feeling of rhythmic, infinite peace.

The repetition of form to create a restful feeling should be used more often in church design.
via Inhabitat

Very beautiful- although a bit cold. Interesting how similar this is to the Memorial church in the centre of Berlin. That is made largely of remains of shattered glas from the old church destroyed in the war.

I love it ! Very creative ! That's actually really cool Thanks.