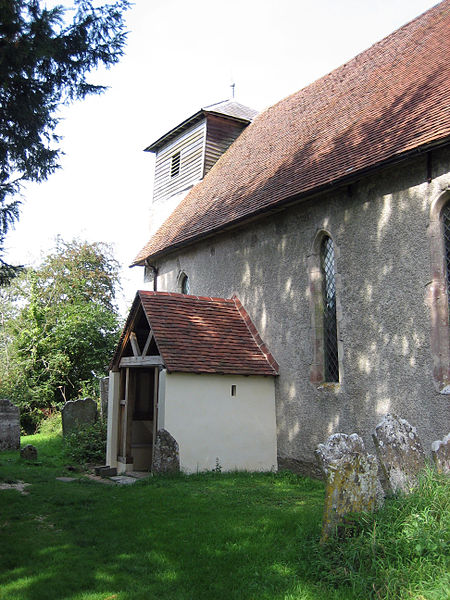 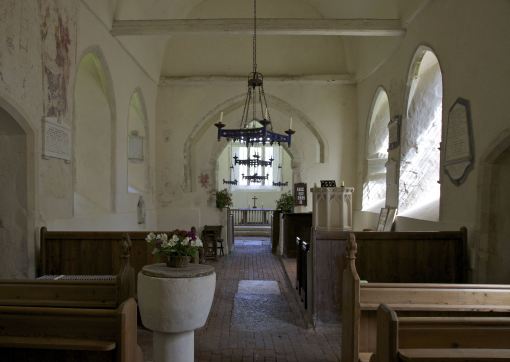 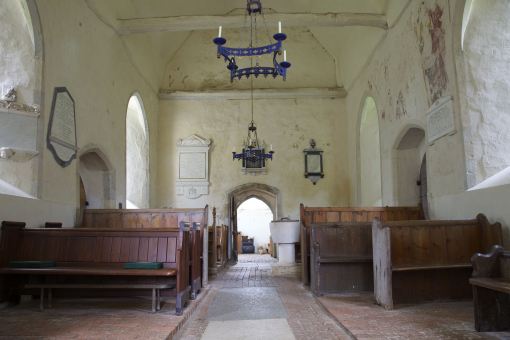 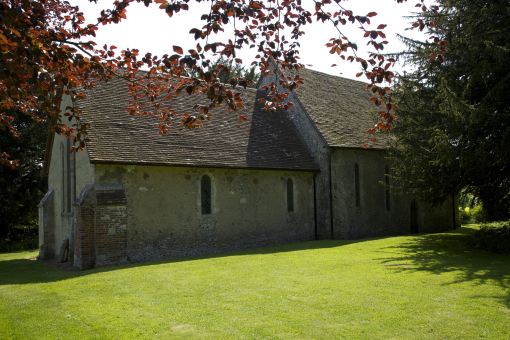 It has no tower, spire, or bell, but the Norman church of St.Michael's (13th century) of Up Marden in West Sussex draws both believers and unbelievers alike; famously appealing to architectural critics (and atheists) Simon Jenkins and Ian Nairn.

So it's worth considering what this little space--simple white walls, deep set windows, plain stone and tile floors--knows about the power of sacred architecture that contemporary churches don't.

Some of it, I think, is the honesty of its austere materials: local flint and plain whitewash. No flash, no pretense.  Nobody is trying to market to you, or fit you into a target demographic, or introduce you to their brand.  What a relief.

Some of it is the intimacy of human-scaled spaces that seem to resonate in close communion with both God and man.  This isn't a church that wants you to, or lets you, have forty square feet of space to yourself.  Nope, you're going to be close.  Surrounded.

Some of it is its age, or rather its tenure.  The church has lasted in this space for going on 900 years, and there's a definite sense that it, like God himself, isn't going anywhere anytime soon.  It will still be there to comfort (or confront) you.

I'm not sure that all the flash and vast and new of modern church architecture (and here I'm speaking mostly of American church architecture) is taking us where we want to be.   There's something in St. Michael's that makes you put down your iphone.   And something that makes "the unbeliever depart...ill at ease", according to Simon Jenkin's essay on the Downland churches (of which St. Michael's is one) and their effect on both him and Nairn.

"Nairn....was a sceptic and a rebel and loved his beer...yet Up Marden found its way into his soul. I believe he visited it when depressed and nearing his premature death. He declared that it moved him beyond religion. It had an atmosphere developed by 'slow, loving, gentle accretion, century by century'. No carving, no art or architecture could explain its effect.

These places disturb us unbelievers. Great religious monuments and their builders we can take in our stride. We have the measure of Yorkshire's Cistercian priors, the wool tycoons of East Anglia and the guild princes of London, Norwich and Bristol. They raised their vaults to the glory of their vocation or the salvation of their souls....Their churches were for this world as much as for the next: it is in this world that we appreciate them.

But the Downland churches are different. They weave not neither do they spin, yet there is not a  cathedral in England that has their power to move the spirit. This power does not respect belief or unbelief....I trust Up Marden to have been a place of  refuge. I see its parishioners finding a deep comfort in these walls, the comfort of certainty, a belief in a better life to come."

Being no atheist myself, I would say that there is a greater Presence in the church that drew Nairn and discomfited Jenkins.  But in thinking about St. Michael's as a physical, architectural space, I think its genius is that there is nothing in it to interfere with experiencing the presence of God.  Nothing glares, nothing shouts, nothing puts itself forward to distract the eyes or jar the soul that may be just on the cusp of discovering something greater.

I think we should learn from that.

[I found out about St. Michael's through a post at the ragpicking blog, which is also the source of the photos in this post]
Share |
Posted by arcady at 9:40 AM

This delightful church puts me in mind of another St Michael's: Longstanton, which was the model for St James-the-Less http://www.flickr.com/photos/timengleman/sets/72157616033653381/