From the Mailbag, Part I

I've gotten some interesting comments and queries from readers, which I'll be sharing over the next weeks in case they are helpful to someone else as well.   The first was from a small-town Kansas pastor with an expanding congregation, just beginning to think about a new building, and seeking advice on how to make the design match their purpose and goals.  Here's my response:

I'm glad you're thinking about this, because churches are neglecting the potential of church design as an outreach tool. Churches have come to think alot about their screens, but comparatively little about their spaces.

One comparison I made with my own church was to ask them how great they thought it would be if they designed a website that got 18,000 hits a day. They'd be over the moon! But that's how many people a day drive past our new building site. So it's critically important that the building be a constant, speaking reminder of who we are. Way MORE important than a website, actually.

I'd suggest that you start by defining some words that reflect your values. The word definitions are great done at a leadership level, because they are central to the vision of the building. For us it was "light and truth" from Psalms 43:3. Then think about how those words might be 'distilled' into something abstract. For example, most people might try to symbolize light and truth by drawing a picture of a sun and a picture of a Bible. Too literal. Turning light and truth into a building, for us, meant lots of transparent glass, delicate construction members, and authentic materials that didn't pretend to be something else. 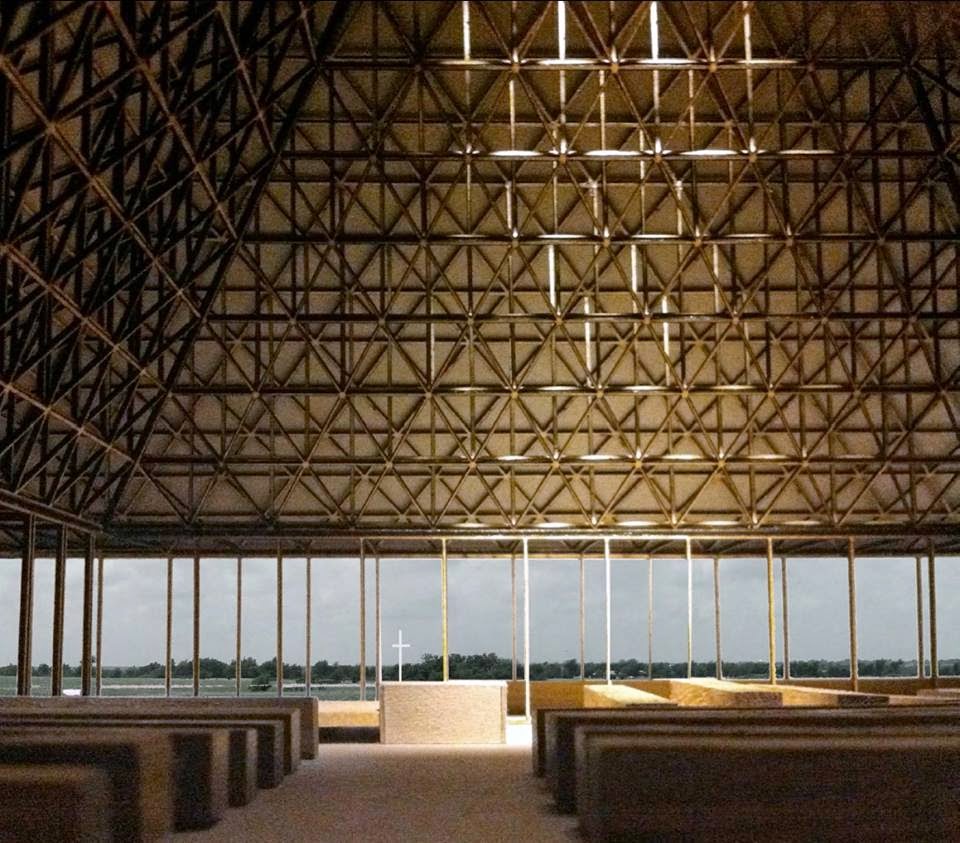 That's a key concept for any church I think. It's become popular to talk about authenticity, yet our buildings are anything but. And more modern churches can be the worst offenders, by using shopping mall/theatre/coffee shop spatial language where it's really not appropriate. Because we aren't that. So it always feels weird, like something of a con.

I notice that even people that don't think deeply about spaces like I do notice when something is off, they just can't ascertain why. And one of the things that's off in emergent churches is the lack of any spatial authenticity. We keep telling ourselves it's great, this shopping mall/theatre/coffee shop thing, but in reality it's really not working. In fact, it's often working against us.

So the challenge is interpreting sacred spatial forms and language in new ways that really deeply speak to your church and its mission and how it functions (and that can still include coffee).

But defining it is hard work! It take a lot more thought than getting someone to throw up a metal building with x number of classrooms and a hall that seats x number of people, and that is, I think why many churches don't do it. 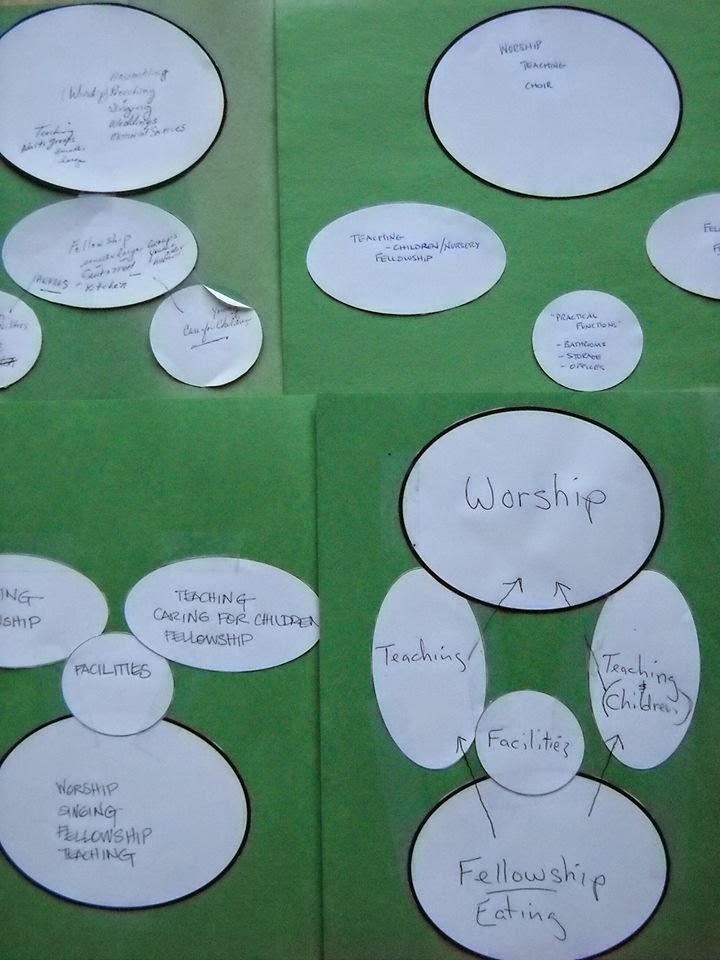 You do need a congregational champion. It could be a staff member or a lay person, but it should be someone that you think has some talent in the area of design, who has a good 'eye', and who can communicate well to people that don't think about design at all, or have never been inside a great building in their life. Building a great building will mean moving people beyond their preconceived notions of what a church *should* be, whether that's the older woman who wants red brick and white columns or the young skater that insists that nothing should 'look' like a church. Both biases can thwart a thoughtful process.

Our church spent a full year and a half in the design process. So even if you're thinking about building well into the future, start now! Most people go to an architect or builder way, way too early.  If they haven't developed their own thoughts, they'll inevitably get the architect/builder's thoughts. And that's not a good solution. 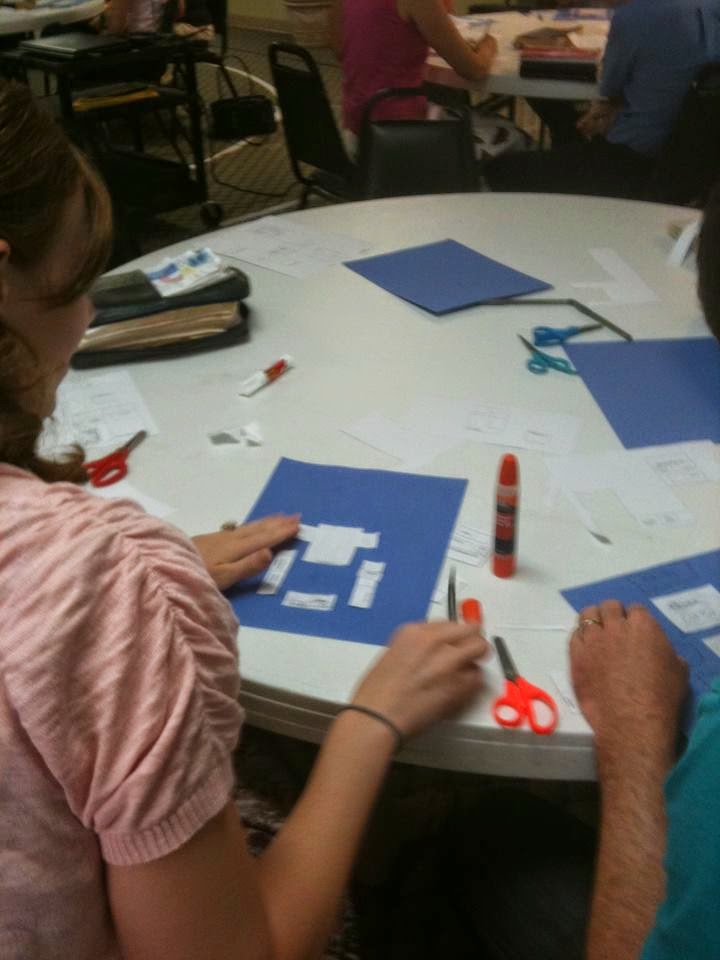 The other issue is people in the church don't initially know what they want, or can't enunciate it well. Simple polling, like "how big should the nursery be?" or "should we have a gym?" doesn't help, because people just give pat answers based on what they already know. You have to be very creative about drawing out their needs and desires for a new building. We spent the whole first month looking at church design throughout history, from the early church to the present day. The last week of that series was spent on modern church architecture, to see how the idioms of the sacred are being interpreted in new ways.

Then we started digging in to function (which should beget form, not the other way around). The first week we just talked about our existing space. We ranked the church on the ancient Roman principles of commodity (how well does it accommodate the people/events held there), firmness (how well does it work as a system, this includes things like say, toilets, and AV), and delight (beauty). The congregation scored the existing building really low on 'delight'. Now if I had just come in and asked the "is the aesthetic appeal of a building important to you", they would have said not so much. But working through the questions made it clear that aesthetics were actually really important to them.

In other weeks we made bubble diagrams, cut up and rearranged the existing floor plan, and answered the famous architectural question (as formulated by Louis Kahn) "What does a church want to be?" 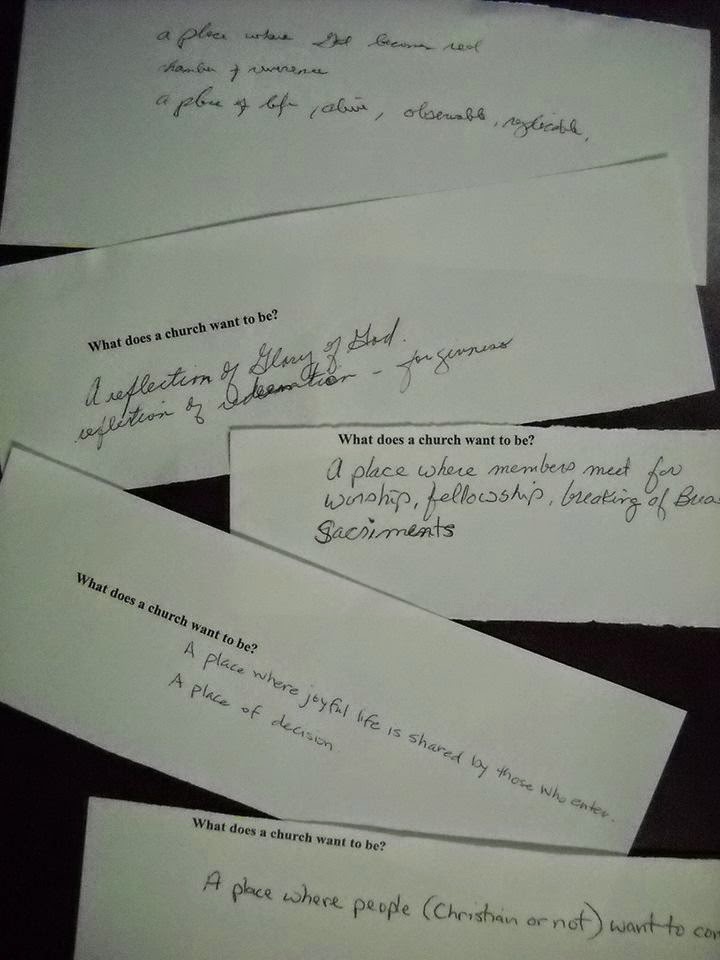 All of these were just ways of ascertaining further the congregation's values for the building and the spaces within it. Only after that summer did we go to our architects with a brief for the design.

Defining your own values in advance is what will enable you to choose the right architect. Prior to working with drdh from London (our current firm) we had a failed effort with a local firm that just was unable to design to the 'Light and Truth' idea. But had we not already made our own design definition we may not have realized that they weren't the right firm for us.

And of course even after your architects present you with a design there are many more meetings to examine and refine the plans. It's important to prepare the church to understand that formulating a great design is like a long and complicated conversation. Most people in my congregation didn't know anything beyond ordering a house plan out of a catalog. It was hard to keep them patient with the back and forth, the many adjustments involved in working through a design, particularly an innovative one. But they've been troopers. 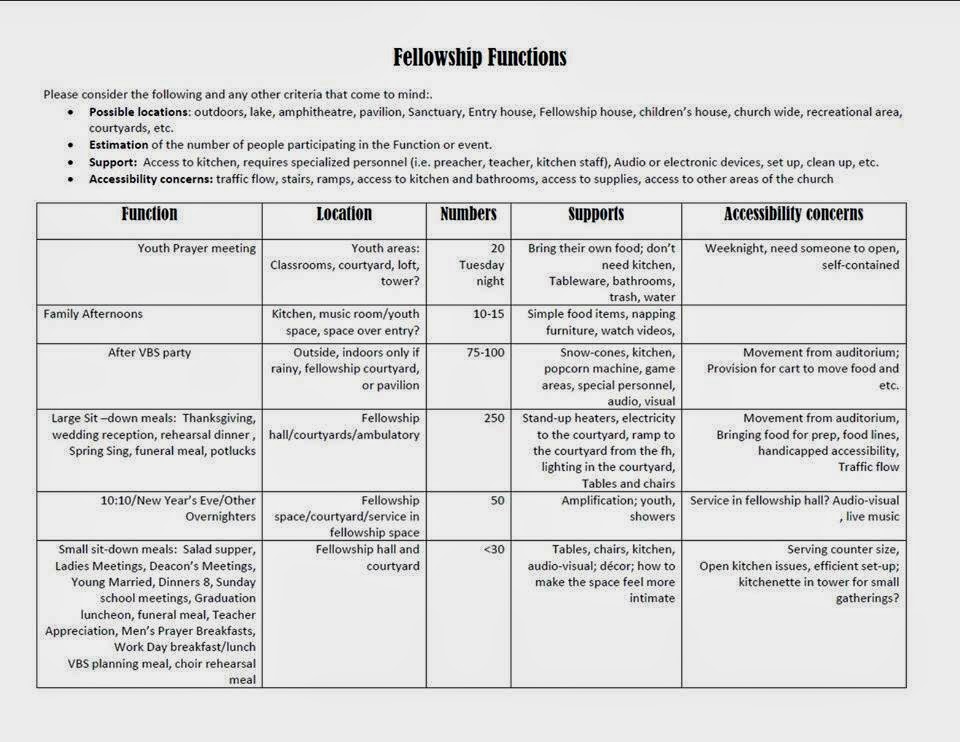 So I guess to summarize I would say that designing a church is a process in which you reap what you sow. Make a serious investment of prayer and thoughtfulness and effort into the process, and it will be worth it all. As our congregation's design champion, I spent extensive time studying the scriptures around the construction of the tabernacle and Solomon's temple. I am utterly in awe of the privilege of building the house of God. It deserves the absolute best that any congregation can bring to it. And to do less, I think, is to miss an opportunity to honor our awesome God.
Share |
Posted by arcady at 5:33 PM

I agree that the process for building a church is one that you should not rush. As much as I hate to admit it, the exterior of a church can make a really big difference. It doesn't have to be anything fancy, but it should look like a place where people can go to become closer to God. It just need to emanate peace. One of the biggest factors in church building is the steeple, spires, or roof in general. It is connected with the symbolism for how we relate to heaven, in my opinion.