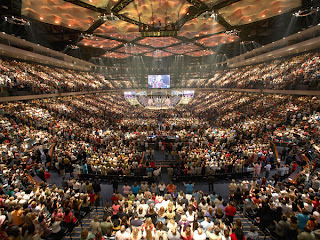 Some of the comments posted in response to the slide show are also insightful in thinking about church architecture:
rob_said_that wonders if "skyboxes are far behind" at evangelical megachurches:
Viewing these images of the megachurch in action, I got the feeling that they've kept everything bad about the scale of Gothic and Renaissance cathedrals but little of the good. In fact, it's all about scale. How big can we make it, how many people can we fit into it, how small can we make people feel individually yet how big as a group?…In these modern megacathedrals (or, in some cases, dihedrals, since some of them look as swept as jet wings), where are the arcades, the columns, the clerestory windows, the pendentives holding up the dome, all the fine details that furnish you with eye candy. If you're in one of these football stadiums like the one in Houston, the stage-altar has been reduced to the level of a detail: you can only see the pastor on the Jumbo-Tron. (Question: are they going to feature instant replays?) Will wealthy supporters be able to view the service from skyboxes, where they can sit outside in a private loge or retire indoors to view the service on HDTV while noshing on the full buffet?
Rob may be half-joking about the skyboxes, but it underscores his larger point that
What these megachurches do preserve of the cathedral tradition is the notion of class hierarchy. In the old system, the apportionment of seating reflected the notion of a structured society: God was at the top, the clergy were next to God, the wealthy nobility were next to the clergy in the pews (but just across the altar rail), and the common folk milled about in the nave…
For stewartandall here, "these churches reflect suburban culture and its demands for comfort above transcendence,"
and the_count remarks that "the new architecture mirrors the new religiosity in america":
where once you might have strolled among quiet cloisters, alone but for the echoes of your footsteps (and perhaps, god,) you now have conference rooms, where you confer with men…where once you might have found solid stone walls resonating with a sense of timelessness and permanence, you now find drywall or, at best, concrete. it seems everywhere, you're reminded that you are in the house of man, a house of men.sure, one might say it encourages congregation and fellowship. and call me conservative if you must…but i've always considered religion a profoundly personal affair…sadly, these new "churches" seem to me to discourage personal communion and deep reflection--opting instead for the frenzied mob and the herd mentality, where peer pressure and peer reinforcement drown out the quieter, and perhaps truer, message(s) of christ.to my senses, these new "churches" combine all that's wrong with religion with all that's wrong with secularism--and the religiosity birthed is the sort that exalts and congratulates man, the sort that, far from bringing god into personal lives, relegates god's existence (dubious as that already seems) to mere pages in a book--law to be propounded from above rather than love graced, to effuse from within.
Here, haikured offers a more mainline assessment:
A fundamental problem for designing a modern cathedral that is inspirational or awe-inducing is that massive architecture has now become common-place. In the middle ages, a cathedral was a scientific marvel, and probably by far the biggest enclosed space a person would go into. Now even houses have "cathedral ceilings", not too mention what we routinely see in shopping malls, government buildings, and sports arenas. So people are harder to impress. But there is also a difference of focus. Entering an old cathedral, attention seems drawn upwards, to the space itself, whereas the altar and whoever is on it often seems somewhat small, and at various corners completely obscured and hard to hear. The main event is the enclosed sacred space, which is felt even when the church is empty. In new mega-churches, the "main event" is clearly what is happening on the stage.
Share |
Posted by arcady at 12:15 AM