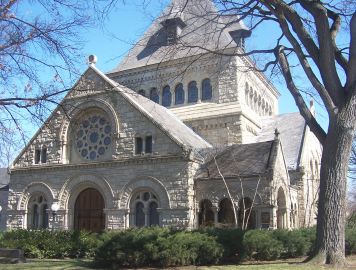 As modern churches wrestle with new worship styles and how they affect the physical structure of the church and its furnishings, it is always instructive to look back at the past for what we might learn.
Things are changing now, but they've changed before. And they will again. 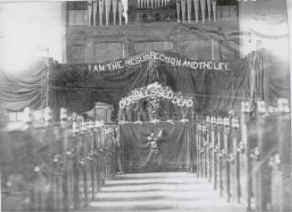 "The sanctuary as built in 1890 was very much of its time. Before the mid-nineteenth century, the two predominant sanctuary arrangements were the nave-chancel and the meetinghouse. The former, an ancient arrangement, is well suited to worship that is liturgical, processional and centered on the eucharistic rite. Clergy perform the rite within the chancel and the congregation observes from a long, narrow nave. By comparison, the meetinghouse shape is adapted for preaching and hearing. The room is wide and the depth of the room short – to minimize the distance from pulpit to listener. 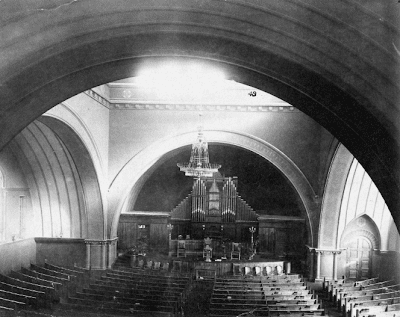 
Two seemingly incompatible trends – revivalism and a liturgical movement – combined to create a worship space not terribly different than a theater. The Second Great Awakening in the early 1800s was driven by emotional preaching from a stage-like structure with the people arrayed around it. Conversion of lost souls predominated over participatory worship. Later in the century, some congregations came to consider this insufficiently sophisticated for their needs and status. Churches favored more structured worship orders with greater reliance on music and ritual, while still stressing preaching.


A theater arrangement resulted. A stage with a modest pulpit offered the preacher a prominent platform, with freedom of movement. A pipe organ and choir or quartet served as back-drop and satisfied the desire for more formal music. The seating was arrayed in a semi-circle in a proportion neither narrow as a nave nor broad as a meetinghouse. The auditorium floor was often sloped up from front-to-back to promote good visibility and hearing from each seat...This shape was touted in local newspaper accounts, which also noted that all seats faced the preaching position.

The prominent position of the choir and organist suited the growing mid-nineteenth century emphasis on music. Through much of the twentieth century, a skepticism about “performance” in worship moved choirs away from front and center. (In some quarters, this has reversed again, with praise bands playing and singing from stages in “contemporary” worship.) ....By the third and fourth decades of the twentieth century, ideas about worship space were changing in the United States . Many “mainline” churches responded to yet another liturgical impulse. A more archeological correct neo-Gothic movement in architecture prescribed a nave chancel-arrangement. 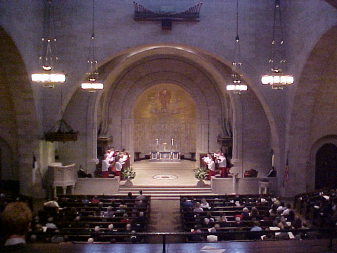 Shadyside responded in 1937-38. That change placed a greater specific emphasis on worship in both Word and Sacrament. Four specific liturgical centers (pulpit, lectern, table and font) are in prominent view. It accords well with the present order of worship, increased frequency of communion and high standard of preaching. In fact, a case can be made that the architecture has influenced worship as well as responded to it. "


What 'innovations' that we are making now will be discarded? Which will be kept?

How do we make a building that will be flexible enough to remain in use (as has Shadyside) for over 100 years?
Share |
Posted by arcady at 7:24 PM 3 comments 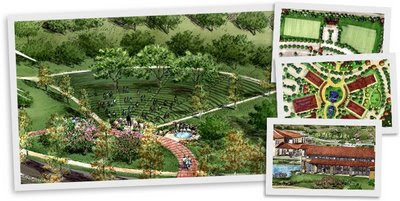 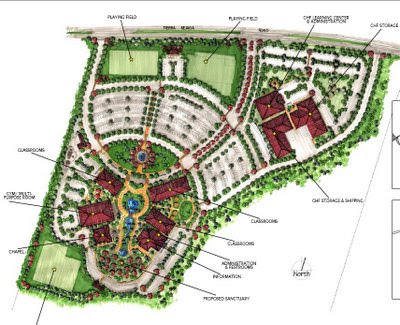 The most innovative feature of Community Church's building plan for a 138 acre site is the decision to have church outdoors--in an outdoor sanctuary, and save the millions of dollars that would have been spent on the building for direct ministry use.

"In developing our property we want to reflect the loving/giving nature of God. We want to build an outdoor amphitheatre rather than an auditorium so we can give more to the poor. We want to provide land to Children's Hunger Fund to support and serve children in need locally and internationally. We want to create a park-like atmosphere for our community to enjoy.
Cornerstone Community Church & Eternity Bible College Facilities
Outdoor Sanctuary – 3,000-person capacity
Gym/Multi-Purpose Building – 1,000-person capacity
Chapel/Multi-Purpose Building – 300-person capacity
Administration Building with Library
Classroom Buildings
Maintenance and Restroom Buildings
Children's Hunger Fund Facilities
Administration Building and Learning Center
Warehouse/Packing Buildings
Athletic Fields
3.8 acres of shared-use athletic fields (no night lighting)
Use by local community will be encouraged
Onsite Wastewater Treatment Facility
Creates tertiary-treated recycled water for irrigation
Comparable to other systems used in unincorporated County areas
Onsite Parking Facilities
2,000 parking spaces
Eco-friendly "grass-crete" pavement
Open Space
Approximately 58.8 acres of preserved open space
Only 3% of total site area developed
While year-round church outdoors is only a realistic option for friendly climates (Community Church is located in Simi Valley, California), it's high time for a rethink of vast, expensive spaces used once a week.
I admire Community Church's well-thought out expression of goals for the site, and the innovative solution they found to ensure that what they build is in keeping with what they value.
My church is also blessed with a large site--100 acres--and plans to develop part of it as community park space. We hope to include an outdoor amphitheatre, though our climate won't allow it to be in use year round.
Inspiring!
Share |
Posted by arcady at 4:51 PM 3 comments