Colin McCahon (1919 - 1987), New Zealand's most significant artist, began painting in religious themes in the late 1940s.  Through the 1950s, he increasingly utilized text, including this stunning triptych as part of his Elias series, painted in 1959.  His entire catalogue is online here.

This is a special week for our little church, as our architects are visiting again from London with the next iteration of design plans for the new building.  So no posting for about a week...have a blessed Easter season.
Share |
Posted by arcady at 3:45 AM 0 comments

Initiatives in Theology and the Arts 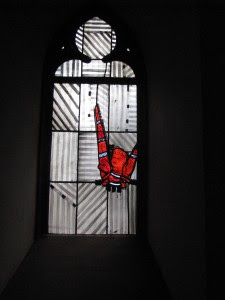 And if you like 'Veil', you'll probably like the idea of Duke University's Initiatives in Theology and the Arts.  Now, I live in academia, so I know how out of touch it can be, how prone to using the word cognate far too often.  (and mercy-sakes-mabel Duke, if you're going to have an art exhibit, put images online already!)  Nevertheless, it is one of the few places that accommodates the kind of prolonged, thoughtful discussions that these subjects deserve.

Since my own interest is in the way that design of space can facilitate the church, I'll be following their research into Theology and the Spatial Arts, and I wish I had time to read everything on the very comprehensive arts-in-theology and theology-in-arts reading list!


See also related programs at the University of Otago in New Zealand  and St. Andrews in Scotland.

Thanks to reader Joelle for the tip!

[the above image of the 'joyful angel' is one of a set of windows by Charles Cordel at the Church of the Three Kings in Frankfurt, Germany   (installed 1956) has stayed with me for some time...I love his splashes of bright color in a muted, paned matrix.]
Share |
Posted by arcady at 8:21 PM 1 comments 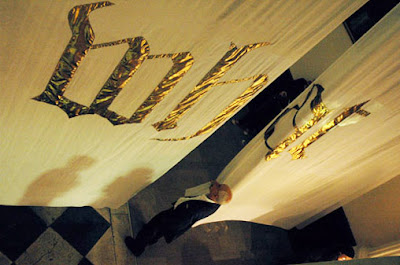 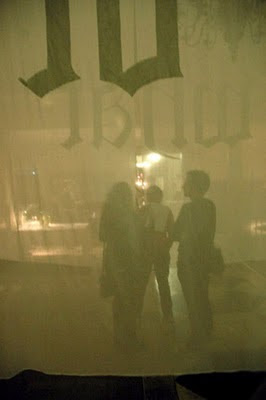 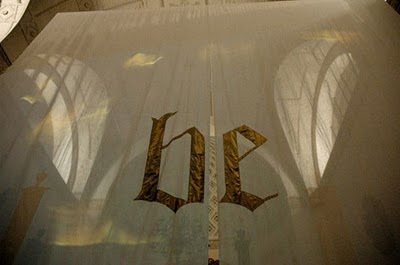 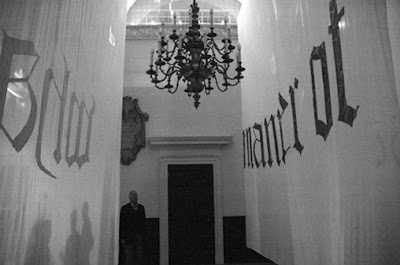 Our new church design has a sanctuary that is a space within a space, and the inner structure provides the possibility of veiling some or all of the interior.  So I was very interested to see 'Salutation', an art installation by Wallspace for Christmas 2009.  "An exploration of the theme of the annunciation, when traditionally the angel appeared to Mary to announce the birth of Jesus, Salutation filled the church with huge muslin veils with the appliquéd gold text 'what manner of salutation this might be'."
Share |
Posted by arcady at 12:37 AM 0 comments 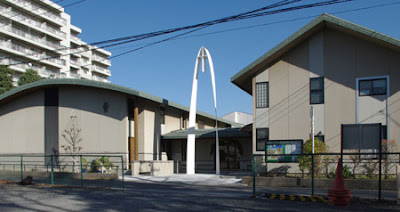 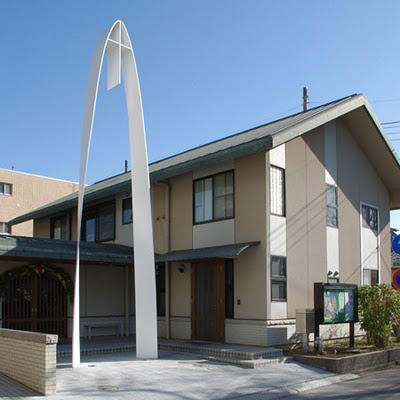 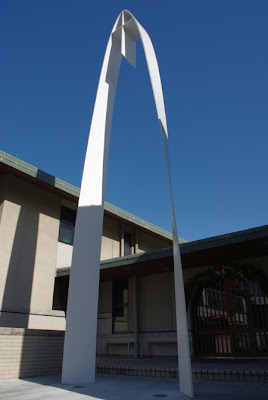 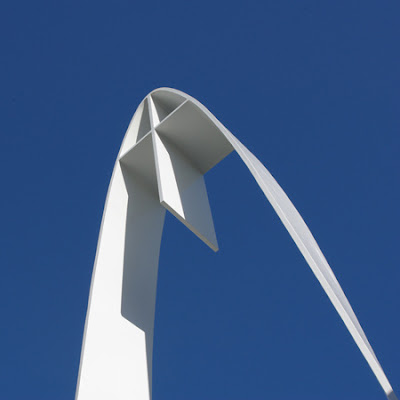 "The existing church complex had difficulty being recognized as a catholic church because of its gymnasium-like appearance with no significant symbol. With the addition of this Cross Tower, the existing complex will easily be acknowledged as a church, showing its religious faith and Christian activities."

Designed by Japanese architects Kensuke Watanabe Architecture Studio for a church in Tokorozawa, Japan.  Obviously reminiscent of the Saarinen arch in Saint Louis, this tower nevertheless speaks to local traditions, using ship building techniques to  gradually twist the arch so that it faces outward at its bottom ground, adding structural stability and  "also creating a welcoming gesture which enables the tower to serve as a gate for people to walk through daily or in ceremonial occasions"

As I've said before, given a banal building, put your money into a single distinctive focal point...hiring a skilled architect to make an innovative steeple gave this church an immediate new visual identity.  [via dezeen]
Share |
Posted by arcady at 2:35 PM 0 comments

Selecting a Church Architect, Part I

Building a church requires careful attention to visual details.  If your architect isn't sensitive to the visual character of their own website, why would they be more attentive to your church?  Churches also increasingly require the incorporation of technology...if your architect can't even stay current with the design of their website is she likely to be on top of technology trends?  The worst websites are often from 'design-build' organizations, which says something, I think.  The website of a thoughtful architecture firm will also convey something of their design sensibility--traditional, modern, avant-garde.  Your first clue to a firm's character, and whether or not they will be in sympathy with your project, is its website.  Take it seriously.
Share |
Posted by arcady at 9:07 AM 0 comments

Another interesting option for flexible classroom groupings within larger spaces like those in commercial settings...from my files; I've long lost the reference.  Let me know if you have it. 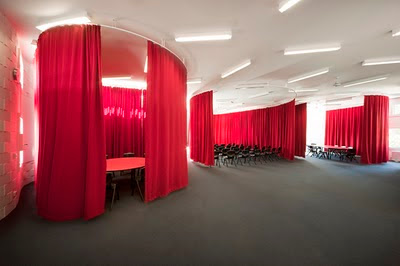