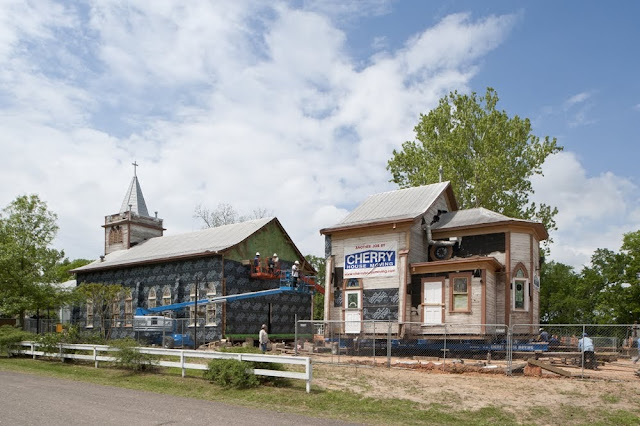 Church splits are generally a bad thing. But when St. Mary's Catholic Church, in a quiet rural area near Plantersville Texas, decided that they needed to grow their solution was to cut their beloved painted sanctuary in half, and add a 30 foot extension in the middle.

"The new space, seating about 140 more parishioners will be done in such a way that it will match the wonderful hand painted bead board interior finishes, new windows will match the gothic arched leaded glass windows of the old church and even the rustic pews will be matched down to every detail. It was necessary to study and profile all the existing wood trim and to be faithful to the construction techniques and joinery of the existing interior detailing. A glass connector will join the original historic structure to a new accessible lobby, restroom block and a new reconciliation room."

(By ZieglerCooper Architects of Houston, Texas. See many more pictures of the renovation, including sweet parishioners moving furniture and stenciling walls, on the St. Mary's website. The state of Texas has a lovely tradition of painted churches like St. Mary's built by 19th century Czech and German immigrants.)

I mentioned the painted pews of Sweden in the previous post and I keep thinking about them...it's striking how rare painted pews are in the USA, except for the occasional drab white.  There's nothing particularly spiritual about woodtones.

So witness the effect of serene grey, pale blue with yellow, green with orange-red accents, and even turquoise.

Or spend hours perusing the amazing set of Swedish churches on flickr to gather your own inspirations (a trip to Sweden to tour churches is definitely in my future plans, now!)

If you're a small church needing a makeover, a good cabinet-maker can provide a durable finish that will totally change your look for a lower cost than replacing the pews either with new ones or with chairs.
Share |
Posted by arcady at 12:46 PM 0 comments 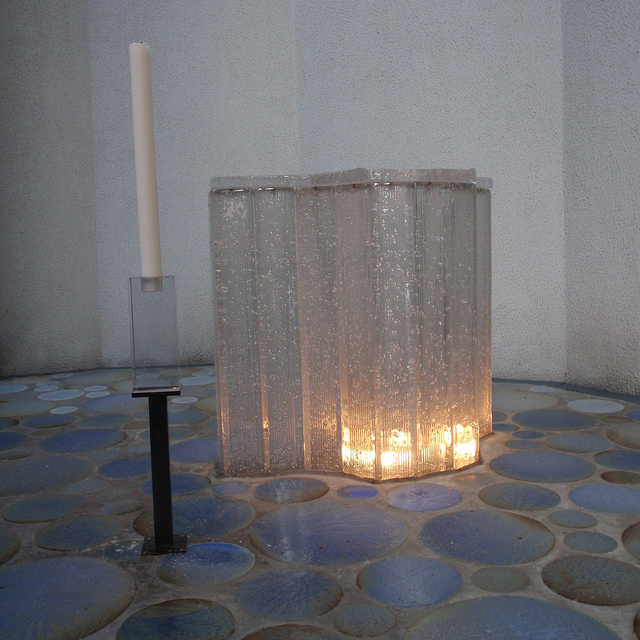 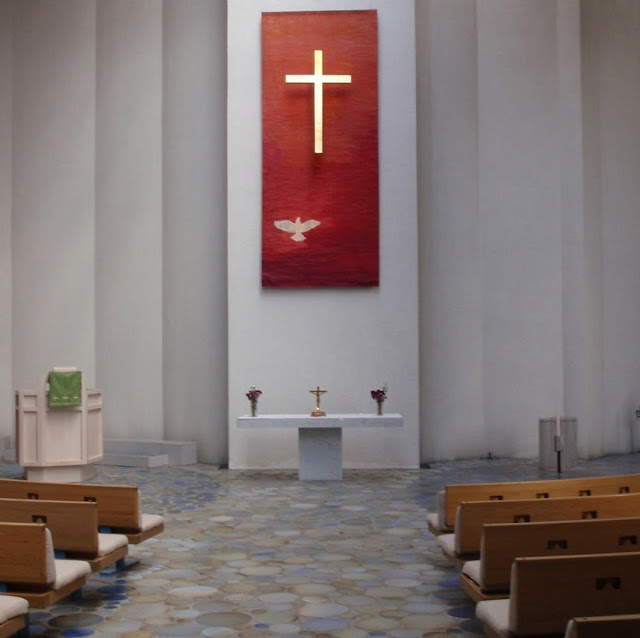 The most beautiful church floor I know is that of Saint Matthew's in Malmo, Sweden.  I'm not that engaged with the rest of the 1983 structure by architect Sten Samuelson , but the interior work--long pale semicircular pews and a font by Swedish glassmaker Kosta--is sublime.

And such care was taken with the floor...an attention rarely seen past the days of the medieval encaustic tiles.  These circular ceramic tiles are handmade, by Swedish ceramacist duo Gutstav and Ulla Klaitz.  Note how their dappled color deepens under the pews and in circles around the font and pulpit, subtly defining these spaces. 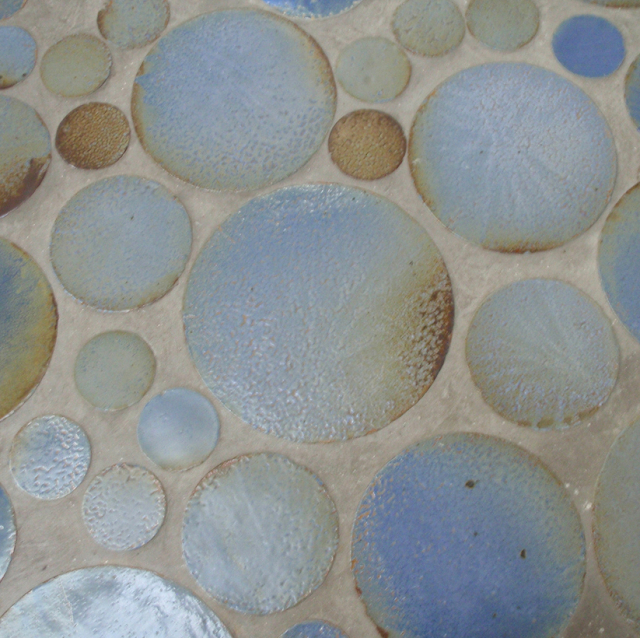 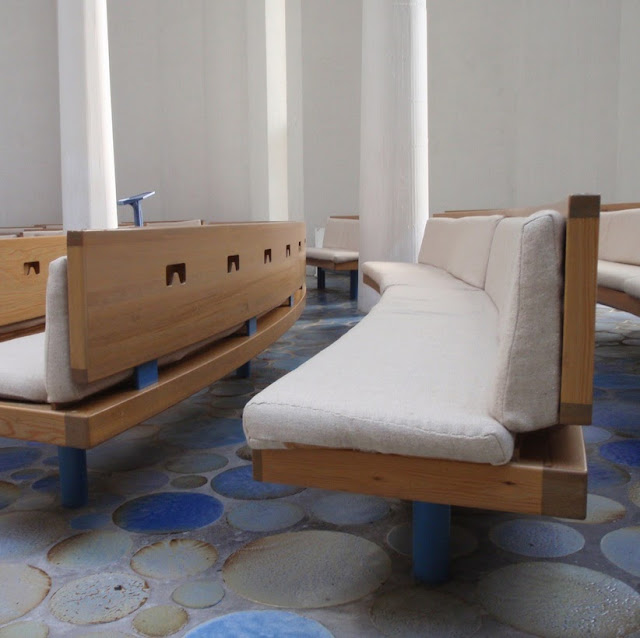 Take a good look, too, at how removing the heavy 'legs' traditionally seen on wooden pews modernizes their look.  I've mentioned before  that this is a wonderful way to use pews--which have many benefits as church seating--in a fresh way.   These pews appear to float on blue supports that not only blend into the floor but also reference the  painted pews traditionally found in Swedish churches. 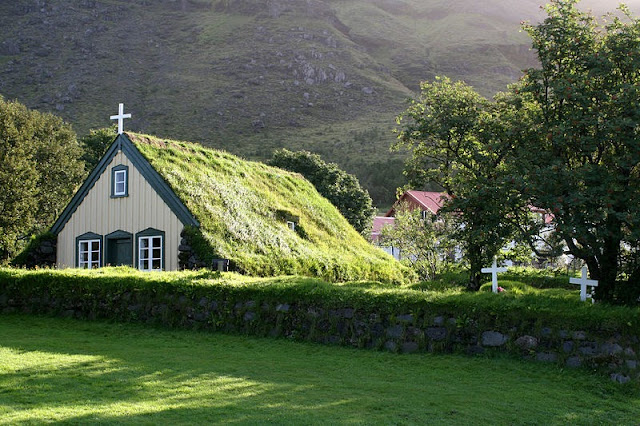 The purpose of a green roof was originally to provide insulation from the cold; this early example is from Hof, Iceland [via wikimedia]. 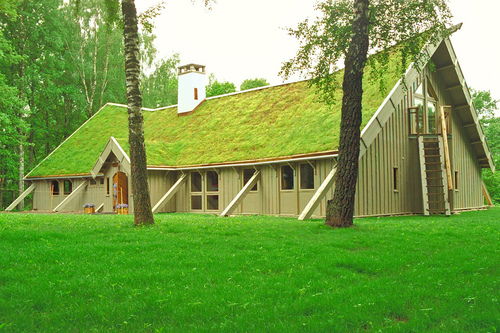 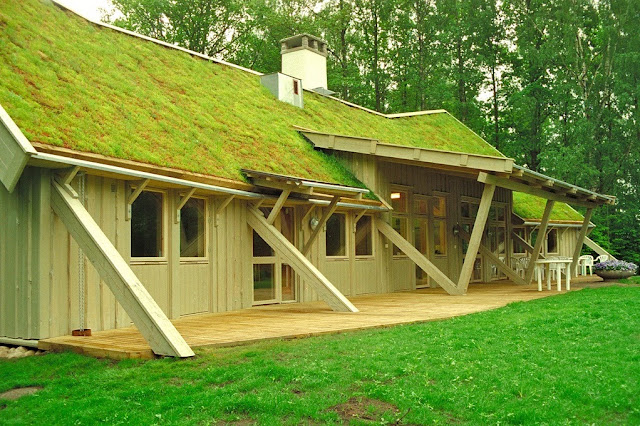 A 1998 example by architect Björn Dahrén for a church in Aligsas, Sweden is similar:  a simple sod that insulates a building constructed from trees on the church's own property. Note the bracing required to support the weight of the green roof. [photos by hansn, via flickr] 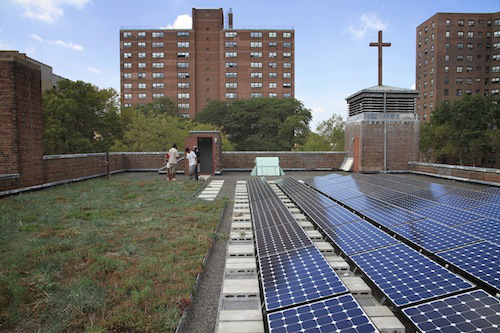 Modern green roofs typically feature an assortment of plants rather than just sod; this 'rooftop wellness garden' was installed by teenagers with Youth Ministries for Peace and Justice at St. Joan of Arc Church in the South Bronx.  [via urbanee] 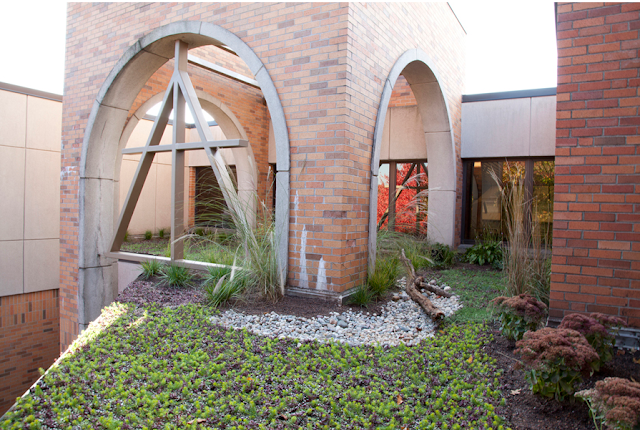 The first green roof to also be certified as a wildlife habitat by the National Wildlife Federation was installed by the Christian Reformed Church National Headquarters in Grand Rapids, Michigan.  To qualify as a habitat required over 20 different plant varieties, perching structures, a variety of soil depths and gravel swaths to appeal to a diversity of bird and insect species.  [via advancedgreenroof] 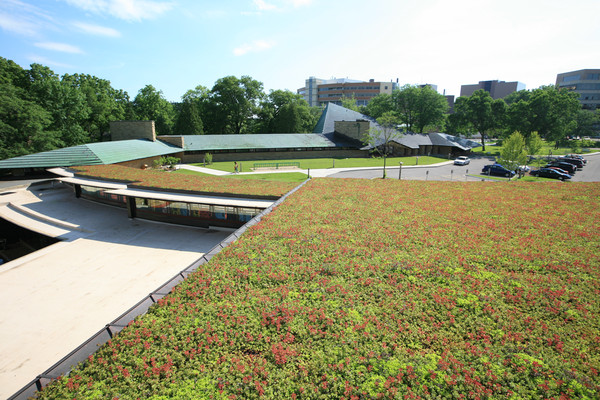 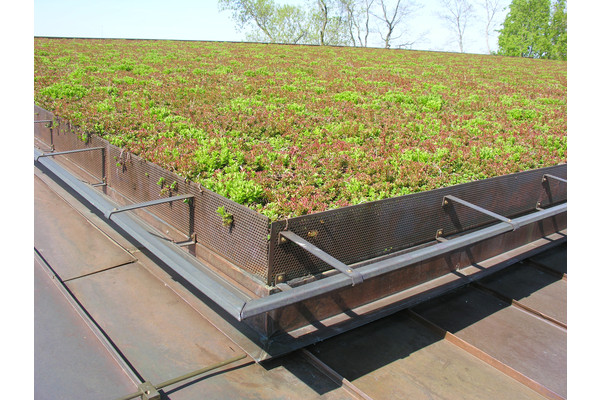